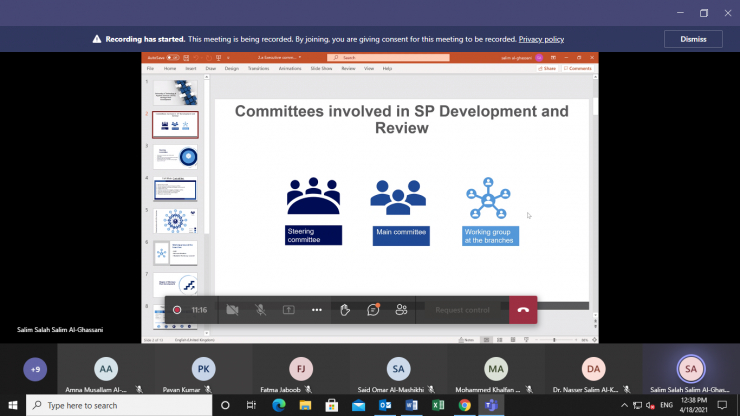 The first on-line meeting for Strategic Plan Development committe was held on Sunday 10th April 2021 at 12:30 p.m. headed by Dr. Nasser Al-Kalbani the assistant dean for academic affairs (Head of the committee). Mr. Salim Al Ghassani Head of Quality assurance department (Focal Point between the main committee and SCT committee) presented the latest update from the main committe including, the action plan to develop Strategic Plan, and the assigned task, and the status of SP draft zero. One of the main task was to conduct a workshop (Mid-May) including different stakeholders to participate in the development of the Strategic Plan.
Published in University News
Read more... 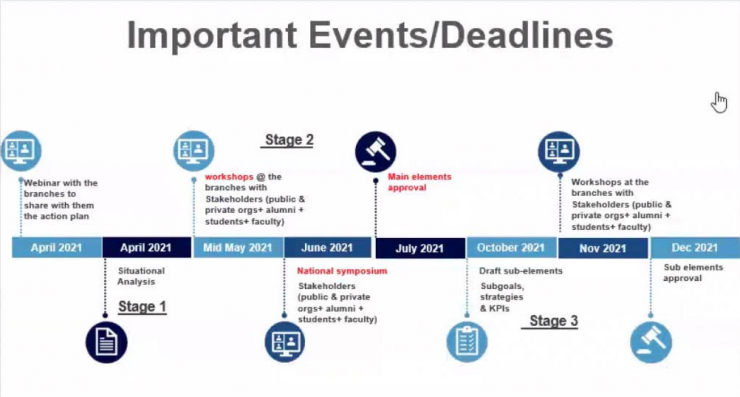 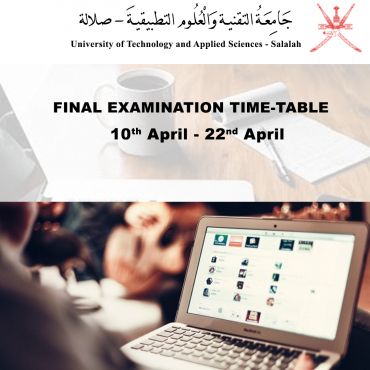 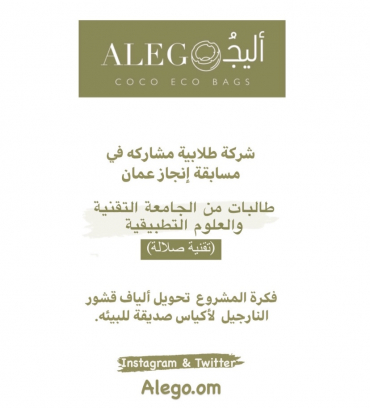 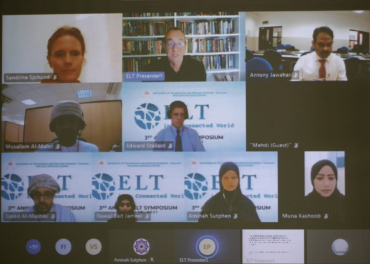 The third annual symposium “ELT in a Connected World” was lauded by participants from various parts of the world when it was broadcast from the English Language Center (ELC), University of Technology and Applied Sciences – Salalah College of Technology on March 18, 2021.

The third edition of the symposium was officially opened by Mr. Saeed Al-Mashikhi, Head of the ELC. He welcomed the participants, researchers, and research papers owners. He explained the necessity for this symposium to be conducted virtually, for the first time, due to social distancing measures resulting from the COVID-19 pandemic.

The activities sponsored by the symposium varied from topics as diverse as research papers to more structurally-based virtual gatherings, such as workshops and scientific posters. The symposium convened together researchers, teachers, authors published in ELT, and specialists in the field of educational and academic curricula from both inside and outside the Sultanate.  Accordingly, all of these elements formed the basis of the slogan for the symposium this year which was "ELT in a Connected World".

Several prominent speakers engaged in the theory and practice of teaching English, from a wide range of countries and contexts, including some emanating from Oman, participated in the symposium. The plenary speaker was Scott Thornbury, ELT lecturer and trainer, author, and award-winning researcher from New Zealand. The three keynote speakers at the symposium included Jonathan Hadley, teacher, trainer and advisor at Macmillan Education- an educational conglomerate publisher and multimedia company from the United Kingdom; Chris Farrell, Head of Training and Development for CES Group Ireland; and John Hughes, presenter and trainer working at Oxford University and composer of the award-winning written content in many different forums and spanning an array of editorial contexts from the National Geographic Learning.

Mr. Thornbury discussed the notion of returning to what is conventionally referred to as “the old normal” in education, the challenges that teachers face in teaching in the current environment, and the differences that are spotlighted when future circumstances may merit returning to the real time classroom.

Meanwhile, Mr. Hadley highlighted his personal experience over the past 20 years in teaching English, along with his insights on many aspects of English language teaching, including important issues that should be addressed, contemporary challenges that should be confronted, and possible future developments, from his perspective, that should be taken into account.

As for Mr. Farrell, he provided his own perspective on the burgeoning number of English language courses that are taught over the internet and the current state of the general field of education in all its various forms and contexts around the world.

In his research paper, Mr. Hughes, on the other hand, touched upon the dimension of critical and creative thinking in teaching English. He focused on critical thinking, writing materials and designing training courses using technology, and their implications for teachers, curriculum and examination developers.

The effective contributions in the symposium, offered by researchers and educational specialists from multiple outposts around the globe, were academically expansive yet distinctive and diverse when considered together, with the participation of a large virtual audience interested in ELT.

The success of the said symposium was made possible through the collaborative efforts of the ELC organizing committee headed by Ms. Huda Al-Huraibi and Ms. Muna Kashoob. 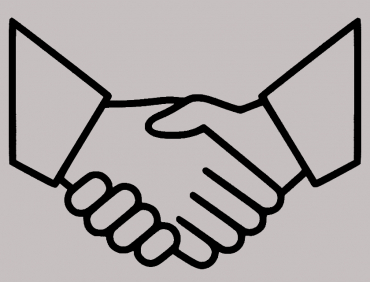 Dubbed as one of the largest and best conferences in Asia, the 17th Annual Cam-TESOL Conference welcomed over 2000 delegates from 50 countries. The Conference offered more than 500 live presentations delivered by prominent international ELT experts, local and international researchers, and English language teachers of various nationalities. The conference was held virtually from February 5 to 7, 2021.

Dr. Muqaibal, ELC lecturer and QA Coordinator, presented a live session on "The Effectiveness of Spaced Practice Using Technology in Learning Vocabulary." Her study highlighted the importance of spacing practice sessions to allow information to be transferred into the long-term memory. In addition, the quantitative and qualitative findings in her study support the use of Quizlet, a vocabulary software programme, which is considered as an effective tool for vocabulary learning and retention.

"It is an honor for me to present my research work at this well-known conference. Presenting at conferences is a great opportunity for researchers and teachers to obtain valuable feedback from a community of scholars and to try out new and best practices in your field," Dr. Muqaibal stated.

Meanwhile, Mr. Al-Maashani, the Head of Section-English Language Programmes (HoS-ELP), presented a paper on "Using Kahoot to Increase the Engagement in Foundation Program." His presentation explored the effectiveness of using educational software such as Kahoot with the foundation students at SCT. The software was added to the Moodle or E-Learning platform to teach vocabulary.

According to Mr. Al-Maashani, using this program broke the culture barrier that many girls and boys suffered from while studying together for the first time in the Foundation Programme. He further said that using this tool gave support to struggling learners.

"Kahoot was more engaging than the basic-functionality of Moodle activities. Besides, teachers noticed that a greater number of students started attending computer lab hours when the teacher incorporated Kahoot activities,” he disclosed.

On Wednesday 27/1/2021, UTAS-Salalah welcomed a team from EIDAAD program who provided an introductory session about the purpose, benefits and registration process for the EIDAAD program. EIDAAD is an educational initiative program that aims to narrow the gap between Industry & Academia and to establish an Internship that lasts for one academic year so students can engage in a longer period of applied learning. The program is aimed to admit bachelor students who are in pre-final year. The admitted students will join one-year industry placement and then will resume their final year studies to complete the remaining credits at the campus to graduate in their chosen field of study.

For more information about the EIDAAD program please visit the following link:

Huawei, the global Information and Communication Technology (ICT) solution provider conducted the "ICT Competition Middle East 2020", the inspiring and challenging competition for the ICT professionals of the region. The competition aims to prepare the next generation of leaders for an intelligent world. These competitions will empower the region's youth with global knowledge and enrich them with new skills that play a vital role in the future of socio-economic growth.

Since 2018 we are part of the ICT competition conducted by Huawei. In 2018 two of our students reached the Regional Final competition and bagged prizes in the final round, which was held in China. In the 2019 national level competition, one of our students did well and landed in 8th place out of the Sultanate's 1000 participants.

This year the preliminary round of Oman Huawei ICT Skill Competition 2020 for the Middle East was held on 17 November 2020. 15 students from our university tested their knowledge in the following areas as 5G, AI, cloud computing, and data storage. Five students got selected from the top 700 scorers in Oman for the National round. Huawei arranged professional trainers who trained the students virtually due to the pandemic and physical distancing measures in the National level competition. The students underwent a challenging assessment process with technical tests and got prepared for the competition. The students got vouchers to take the HCIA certification exam at the end of the training.

The national-level competition was conducted online on 7 December. Mr. ADIL SALEH JAMAAN BAIT SHAGANAH, student of Information Technology Department, Information Security Section, scored second place out of the 700 takers from the different universities and colleges across Oman. Six students from Oman are selected for the Regional final, which will be conducted in Oman.

The Regional Final was conducted on 26 th  December in Muscat due to the Pandemics situation.  Mr. ADIL SALEH JAMAAN BAIT SHAGANAH, was part of the team with three other students from different colleges of Oman. The team got the Outstanding Performance award from Huawei.

Our best compliment to Mr. ADIL SALEH JAMAAN BAIT SHAGANAH and his coaches Mr. Devarajan Veerasamy, Mr. Jonathan Tambaoan, Mr. Bernard Ugalde,      Mr. Sunil Thomas Karickom, Mr. Yashir Ambula, Mr. Ayaz Mohiuddin, and Mr. Suresh Palarimath for their teaching, training, and guidance which made our students holistically competent to match all their peers and excel in all fields. The experiences they acquired through these computations can be a bridge between the classroom and the workforce and encouragement for other students to participate in these type of events The Huawei ICT Competition develop ICT skills and knowledge amongst the region's youth population, giving them the understanding to contribute to their country's digitalization efforts.

Our sincerest gratitude and thanks to the Head of the Department, Dr. Fatma Al Shanfari, and to the whole University management for their continuous support and assistance in developing our students' skills and talents. Every participant is a winner.

On Thursday, April 16, 2020, a remote online meeting was conducted between the SCT dean and assistant deans on one side and the members of the SCT Student Advisory Council on the other side. This was a forum where students were given the opportunity to be heard, have their inquiries satisfied, and to hear a clarification on the measures taken to suspend the study in light of the current situation as a result of the Corona disease (COVID-19) outbreak. Additionally, aspects of developing the procedures of distance learning and its associated assessment methods were discussed, that would enhance the efficiency of the process of e-learning and continue to provide all of the educational processes effectively in accordance with the strategic plan of technical colleges (2019-2024) and the Ministry's plan for transformation to electronic services.

Furthermore, during the meeting, additional ways to enhance the learning process were discussed, including students on the council preparing YouTube content that focuses on giving guidance and suggestions on time management, study planning and the appropriate ways to prepare for tests and/or exams to help students improve their e-learning skills in particular in light of the current conditions. And, the college administration welcomed the initiative of students to conduct meaningful and purposeful competitions after the end of 2nd semester exams.

At the end of the virtual meeting, the students expressed their sincere thanks for the permanent support provided by the college administration to them, and in reciprocal fashion, the college commended the efforts made by all stakeholders and/or involved parties inside and outside the college, as well as the spirit of constructive cooperation between the Student Advisory Council and the college proper ,in its various bodies, to constantly seek to develop educational practices and processes in order to best and most comprehensively achieve the college vision and the development of the student community per se and society in general.